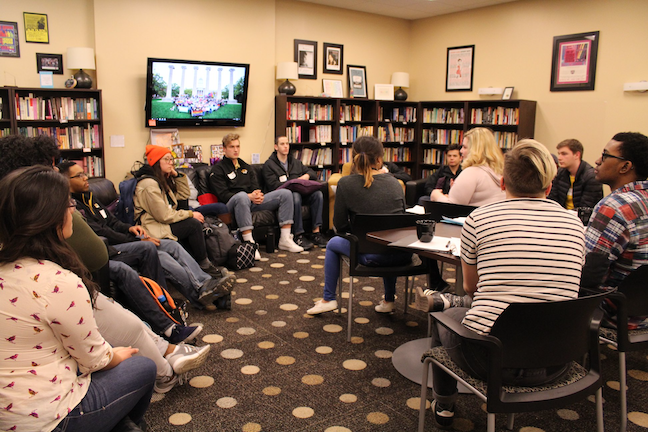 The annual Tunnel of Oppression activity at the University of Missouri allows students to examine the marginalization of various ethnic and identity groups.

Campus free speech bills are making their way through the legislatures in a growing number of states, with proposals in two state houses sponsored by Republicans.

In September, two bills passed a Michigan House oversight committee. One covers when colleges and universities could limit speech and the other would require public institutions to set clear speech policies based on state standards, reports The Michigan Daily, the student newspaper at the University of Michigan at Ann Arbor.

A pair of Republican lawmakers in Wisconsin drafted a bill in August that would force the UW Board of Regents to punish any actions blocking free speech on campus, according to the The Badger Herald, the student newspaper at the University of Wisconsin-Madison.

In a Sept. 13 editorial, the Chicago Tribune applauded Northeastern Illinois University for both inviting former press secretary Sean Spicer to speak and for allowing students and faculty to protest. “The event was a shining success,” the Tribune’s editorial board wrote. “NEIU exemplified how a university should embrace free expression—speech and counter-speech—rather than cancel a forum because some members of the community dislike the speaker or topic.”

Experts, meanwhile, have discussed with University Business how free speech and diversity can coexist on college campuses.

“It’s very easy to put them in opposition,” Lorelle Espinosa, assistant vice president for the American Council on Education’s Center for Policy Research and Strategy, told UB last year. “The reality is that you need both of them to accomplish the aims institutions are after. You can’t have a constructive educational environment without speech and without inclusion.”

A a Gallup-Knight Foundation campus survey done at the time found strong support for the First Amendment but that students felt diversity and inclusion were even higher priorities.

Others fear that academic freedom will be diminished by some of the policy efforts around speech.

“Unfortunately, the voices of academics are increasingly absent from our national discourse,” Jason Seacat, a professor of psychology at Western New England University, wrote in a UB column in April. “The continued erosion of academic freedom will further undermine the confidence, willingness and ability of scholars to weigh in on matters of importance to our democracy.”

Building a better network for women in tech

“Through technology, women can gain independence. But we need a better network,” says Nada Marie Anid of New York Institute of Technology and co-editor of The Internet of Women: Accelerating […]

Facing attrition and high expectations, campus leaders are burned out and need help. The EAB-NAGAP report offers a number of resources.

In some cases, colleges and universities will opt to fund some site development items, such as landscaping, as an operational cost instead of a capital cost. But the decision depends […]