University of Houston President Renu Khator, who spoke little English when she came to the U.S. as a graduate student in the early 1970s, has reversed low retention and graduation rates, as well as substantially boosted fundraising.

Even though Renu Khator developed a love of learning as a schoolgirl, her ascent to higher education and the global workplace was hardly guaranteed.

She grew up in the 1950s and ’60s in a “very conservative” family in a rural part of India, where a woman going to work “wasn’t part of the culture,” Khator says. Though she had earned a bachelor’s degree at a local college, her father was more focused on finding her a husband than he was on sending his daughter away from home to attend graduate school.

With help from an Indian government scholarship, however, she convinced him to let her seek a master’s degree in political science at a college about five hours from home. But she didn’t get to finish.

“I was studying somewhere else, outside the eyes of the family; for him it was a nightmare as to how he was going to arrange a marriage for me,” she says. “Nine months later, my father called me home and there were my would-be husband and his mother and his sisters. I got engaged that same day and was married off 10 days later.”

But that moment in 1974 didn’t bring higher education to an end for the current president and chancellor of the University of Houston, who, by the way, is still married to the same man.

‘Ice cream on the street’

Her new husband, Suresh Khator, then studying engineering at Purdue University, also had a strong passion for education. He brought his wife to Indiana and served as a translator when they visited a graduate advisor’s office at the university to enroll her.

The advisor wanted her to start with undergrad classes, but eventually agreed to let her audit two master’s level courses while she learned English. The advisor couldn’t promise that she’d be able to continue her studies, Renu Khator recalls.

“It was the toughest semester of my life,” she says. “I watched eight hours of television a day—sitcoms like I Love Lucy, Andy Griffith and Dick Van Dyke—just so that I could comprehend and I could understand. And I would write eight drafts of every research assignment and read chapters two to three times so I could grasp what was going on.”

She got A’s in both classes, was admitted to graduate school, and finished her master’s degree a year later. A diverse student body helped her to adjust despite the cultural differences, she says.

“In India, I grew up in a wealthy family, and here, I was the wife of a poor graduate student,” she says. “In India, because I was in a small town, I was escorted everywhere; I could never walk on the street by myself. Here, I was eating ice cream on the street.”

The couple spent a few years back in India and had two daughters before returning to the U.S., where she finished a doctorate in political science and public administration at Purdue. Her first teaching position—as a visiting lecturer for $18,000 per year at the University of South Florida in Tampa—wound up establishing her roots in higher ed.

She spent the next 22 years there, rising to the position of provost.

Though the U.S. offered greater career opportunities than were available to her in India, Renu Khator says that moving into and up through a university administration “was never easy.” Students and others at the University of Houston can keep track of President Renu Khator on Twitter. She regularly updates her 91,000-plus followers on daily activities such as touring campus, getting a flu shot and caring for Ruby, the stray German shepherd she adopted.

Renu Khator’s journey toward higher ed leadership started at the University of South Florida when, in an effort to burnish her bid for full professorship, she joined the faculty senate and was elected president two year later.

The position required her to balance the interests of faculty deeply opposed to the board of regents’ appointment of a campus president from outside academia and that leader’s subsequent decision to start a football team at the university.

Renu Khator, president of the University of Houston since 2008, grew up in India

“When you lead faculty, you realize how many different interests there are; it’s not a monolithic body,” she says. “You also learn how to value shared governance. You learn how to value the processes—that it’s not only about reaching the goal. It’s about the journey, and the experience and involvement of people having an equal impact on the outcome of any initiative.”

At the same time, the new president, Betty Castor, became a mentor who helped Khator develop her style of inclusive leadership.

“From her, I learned administration from the external point of view,” Khator says. “I learned what role the community can play in building a university. I learned how to interact with legislative stakeholders and the important role they have. I also learned the art of listening and consensus building.”

Those skills helped her to reverse low graduation and retention rates and to solve some of the other challenges she found when she became president and chancellor of the University of Houston in 2008. She brought with her the vision of making the namesake institution of the country’s fourth-largest city a nationally competitive research university.

“The university wasn’t showing up on national lists,” she says. “There had been three years of declining enrollment and the fundraising was very small, but bottom line, the university had a lot of potential because of its location.”

Within just three years, Renu Khator and her team had achieved one of her top priorities: the University of Houston’s Carnegie Classification as a Tier One research institution.

Research activity has doubled during her tenure, and Khator says she plans another 50% increase over the next five years. “You can only build yourself on your region’s economy,” she says. “We had to sync the university’s strength with the region’s strengths.”

More from UB: Glenda Baskin gets down to business

Houston is one of the planet’s energy capitals, but it wasn’t until Renu Khator arrived that the university launched its petroleum engineering program. She also developed an offshore energy institute to work with industry.

The Texas Medical Center in Houston is considered the world’s largest health care complex, and in May, the university received state approval to open a medical school at the center in 2020. Beyond academics and research, the medical school will play a key role in the university’s community outreach efforts. In one initiative, student medical teams will adopt a neighborhood family and monitor their health care needs for four years, Khator says. 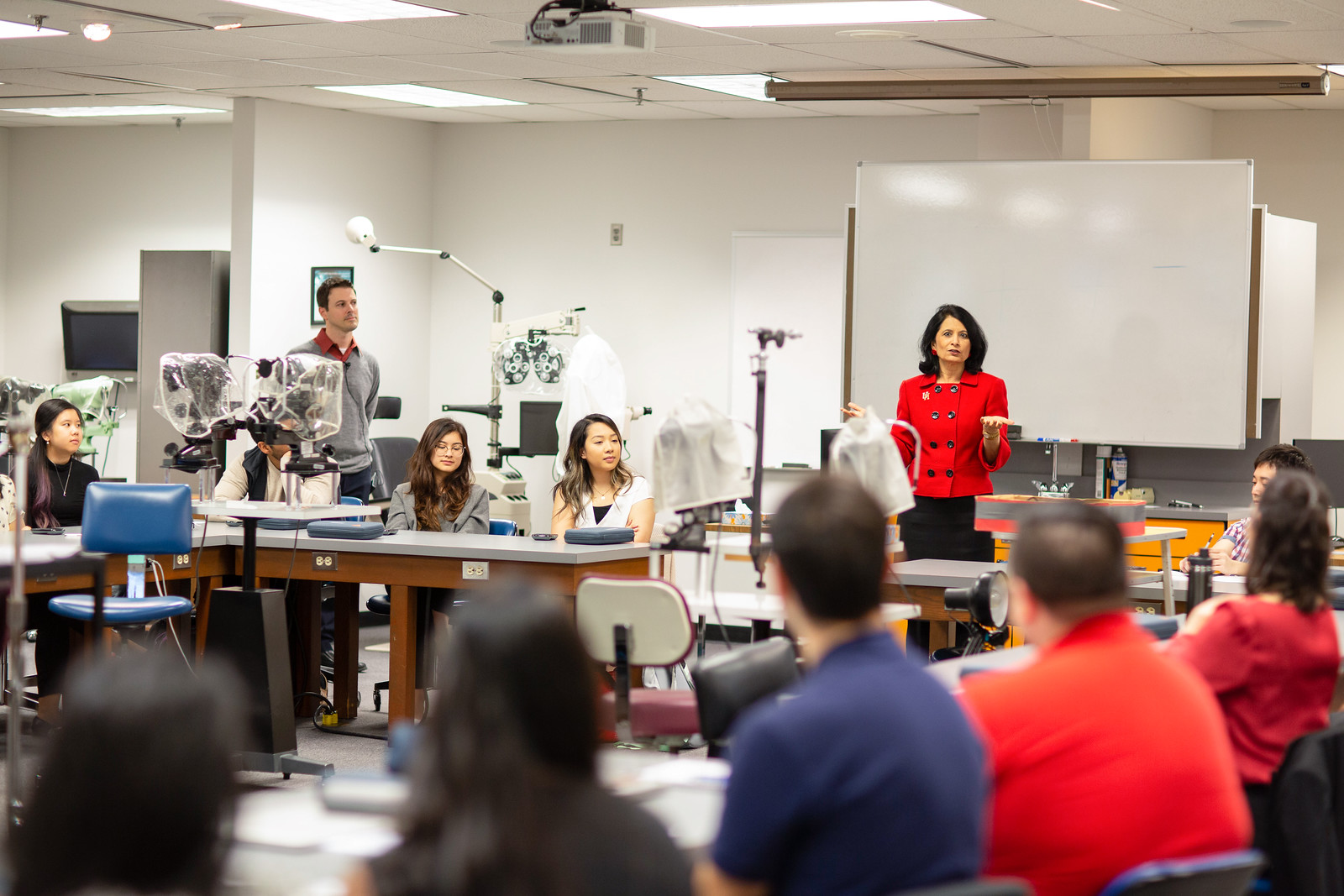 President Renu Khator visits graduate-level classes. The University of Houston completed a $1 billion fundraising campaign in March, more than a year ahead of schedule.

Also during Khator’s first three years, the university received a Phi Beta Kappa chapter, which she calls “a major milestone” that showed the highly diverse institution could compete with the nation’s top schools. The university’s graduation rate has increased by 21% during her tenure.

To maintain that diversity, students whose families earn $50,000 or less per year do not pay tuition or fees. They receive guidance from a beefed up advising program that pays particular attention to first-generation students and others who are at risk of falling behind and dropping out.

Khator takes particular interest in first-year students, visiting about 25 freshman classes during the first week of school each year. “I tell them: ‘Just because you’re here doesn’t mean you’re going to graduate,’” she says. “I give them my email and tell them if they think they’re getting caught in the bureaucracy, send me an email and let me help.”

Her goal is to have her team resolve a student’s problem—whether it’s related to grades, roommates, food or anything else—within three days.

Renu Khator’s ‘university on the rise’

In March 2019, the university completed a $1 billion fundraising campaign—1½ years ahead of schedule. Before Khator’s appointment, the University of Houston had not embarked on a capital campaign in 25 years, but she saw opportunity in a region where about $40 million is raised for philanthropic causes every year.

To help revamp the university’s fundraising capacity,Renu Khator hired a new vice chancellor to spearhead the campaign. “We also had to build a credible story that the university was worth investing in,” she says. “The tier one classification showed it’s not just a neglected university; it’s a university on the rise.”

So far, the funding has been used to build or renovate 16 facilities, including a new arena for men’s and women’s basketball, and to create more than 1,000 new scholarships.

Khator, who joined the NCAA’s Division I board of directors in March 2019, has also worked with her team to build up the university’s other athletic programs because they help with recruitment, fundraising and campus pride.

More from UB: College president is setting the pace

“If you’re going to have an athletic program, it should be nationally competitive because having a mediocre program is a liability,” she says. “If it’s run right, athletics provides support to the academic mission.”

Renu Khator also keeps active, with yoga and meditation sessions each morning. In addition, she writes poetry and short stories in her native language, and has had some of them published in India. She often writes about women’s issues in her rapidly modernizing homeland.

“The job is so intense; you need something that takes you to a different place,” she says. “The destination is one thing; the journey itself is also a reward.”

The more we maintain a physical distance from each other, the more we need to find creative ways to support each other, to communicate with each other, and to exchange words and feelings of love and affection, says Lasell University President and UB guest columnist Michael B. Alexander.

The university accuses him of withholding damaging personal information from school officials while negotiating a lucrative employment agreement for himself, among other allegations.