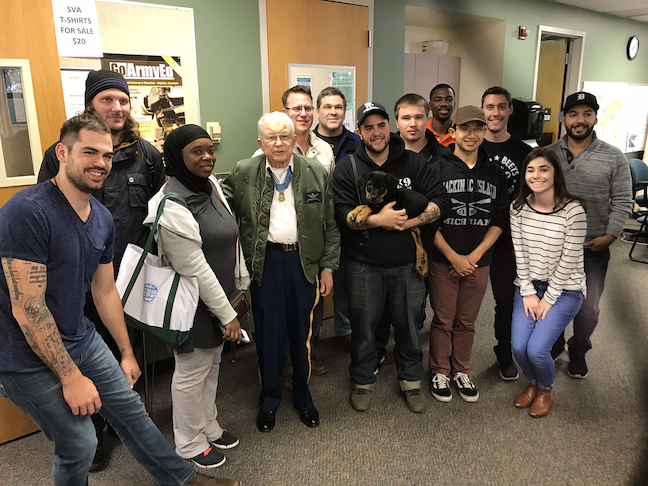 Eastern Michigan University is supporting veterans in higher education by giving them access to a resource center where they can get help with academic and financial planning.

Classrooms can be alienating to veterans in college who are used to the mission-oriented military life.

It’s not because veterans don’t have the academic skills, but they don’t always feel welcomed by students and faculty members who may have different political beliefs, life experiences and worldviews, says K.C. Kalmbach, an associate professor of psychology at Texas A&M University-San Antonio.

“Doing clinical work with military members, a thing that struck me was one common theme,” she says. “Service members would say, ‘I tried school, and it wasn’t really for me.’”

Kalmbach’s four-hour course combines online and face-to-face sessions on supporting veterans in higher education. The mandatory training introduces faculty and staff to the characteristics, traditions and language of military life. For instance, veterans coming from a rigid, hierarchical structure may feel a bit lost and isolated without a chain of command and their “battle buddies,” she says.

Veterans in college can also get frustrated when traditional students show up late for class, which is a sign of disrespect in the military. Faculty, meanwhile, may inadvertently alienate veterans by extending deadlines for turning in assignments or delaying exams. Veterans, for instance, may have to arrange childcare or change work schedules to take tests.

“Coming to an environment that purports to be egalitarian can feel loosey-goosey to a military member,” Kalmbach says. “As a faculty member, you may think you’re being flexible, but for military students, you may be creating chaos in their lives.”

“In the military, you don’t ask for help, which can be perceived as a sign of weakness, a personal failing; you just figure it out,” she says.

Some faculty may even feel intimidated by veterans in college, who have been trained to be intimidating in combat. “You may see them keeping a distance and sitting in the back with their arms crossed; it can look a lot like a law enforcement posture,” she says. “But the training helps professors understand that this can be a mask, hiding feelings of insecurity and fear.”

Faculty—even those who may not be entirely supportive of the nation’s recent military operations—are motivated to participate because they want to see veterans in college persist and graduate, she says, adding that they come to “understand that the military is another culture under the multicultural umbrella.”

Read UB’s main feature: How to support veterans from enrollment to completion

As demographic, economic and market volatility continue to challenge higher ed’s ability to enroll a sufficient number of students able to take advantage of the educational opportunities available, understanding and […]