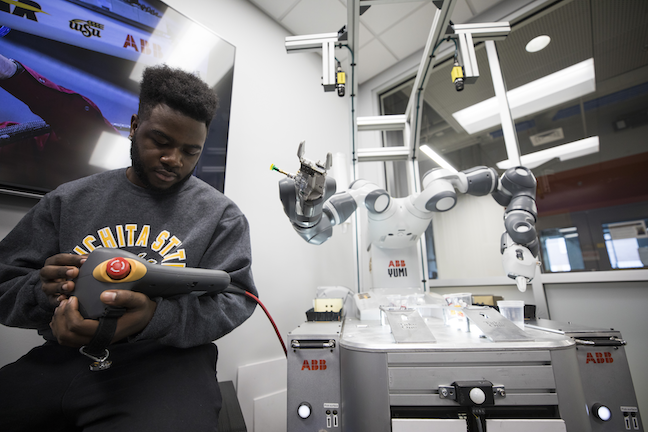 FirePoint, an engineering partnership between Wichita State University and the U.S. Army, has moved online where students will develop new drone technology.

Campus closures and social distancing have forced one military-backed, drone-building project deeper into virtual reality than the college students involved had originally anticipated.

FirePoint, an engineering partnership between Wichita State University and the U.S. Army, was set to launch a collaborative STEM project in which teams of college students would develop new drone technology at a series of in-person and virtual workshops over the next year.

Now, of course, all meetings are virtual as each team works on a separate component of the drone, says Steve Cyrus, FirePoint’s manager of technology collaborations.

FirePoint will adjust further by shipping virtual headsets to the students so they can collaborate in Dassault Systemes’ 3DExperience platform.

More from DA: How to block ‘Zoom bombing’ in higher ed

“Folks who are successful in these types of situations are the ones who see an opportunity to do something that’s unique,” Cyrus says. “The virtual reality portion is something we wouldn’t otherwise have pushed as strongly into.”

The project’s first session, scheduled to take place in Wichita in mid-March, occurred online on April 2. The FirePoint STEM program aims to introduce budding engineers to the high-tech future of work.

A silver lining is that the 3D platform will allow students in different parts of the country to work together as avatars in the virtual world.

And this, Cyrus says, is a form of collaboration students will likely encounter in their professional lives when working with engineers across the globe.

“We’re being forced to grapple with what this will look like as far as the future of work,” Cyrus says. “So much of what students need to learn isn’t really going to be found in the classroom.”

White men continue to dominate key leadership positions such as full professors and chairs within departments.

This report examined the disparities that exist throughout the NCAA and its member institutions regarding racial and gender representation. The overall grade was a C+ with a racial hiring grade of a B and a gender hiring grade of C+.