Campuses switch to solar and other renewable energy sources while reducing consumption
By: Matt Zalaznick | January 24, 2020 Eight colleges and universities in the U.S. have become carbon neutral.

Colorado College says it is the first higher ed institution in the Rocky Mountain region—and the eighth in the nation—to achieve carbon neutrality, even while increasing its building footprint by more than 10%.

“We’ve done the difficult work of reducing our on-campus emissions first, rather than what some see as ‘buying our way’ to neutrality through offsets,” Director of Sustainability Ian Johnson said of the initiative that began in 2009.

The college’s Tutt Library also became the nation’s largest net-zero-energy academic library thanks to an underground geothermal energy project and major renovations. It has also installed numerous solar installations on and off campus.

More from UB: How a campus fitness center is going green

In April 2019, Colgate University became the first college in New York to reduce its net carbon emissions to zero. Over the last 10 years, the college has installed solar arrays and geothermal heating and cooling systems; achieved LEED certifications on several buildings; set its own green building standards; and purchased carbon offsets for employee travel.

Also last spring, Bates College in Maine became carbon neutral a year ahead of schedule. Bates eliminated 95% of its campus greenhouse gas emissions, and purchases carbon offsets to cover the remainder, the college said in a news release.

More from UB: How to navigate the campus e-scooters trend

Other colleges are teaming up to reduce their carbon footprint. Five New England colleges—Amherst, Hampshire, Smith and Williams in western Massachusetts, along with Bowdoin in Maine—have combined their buying power to launch a solar farm in Farmington, Maine, University Business reported in 2018. 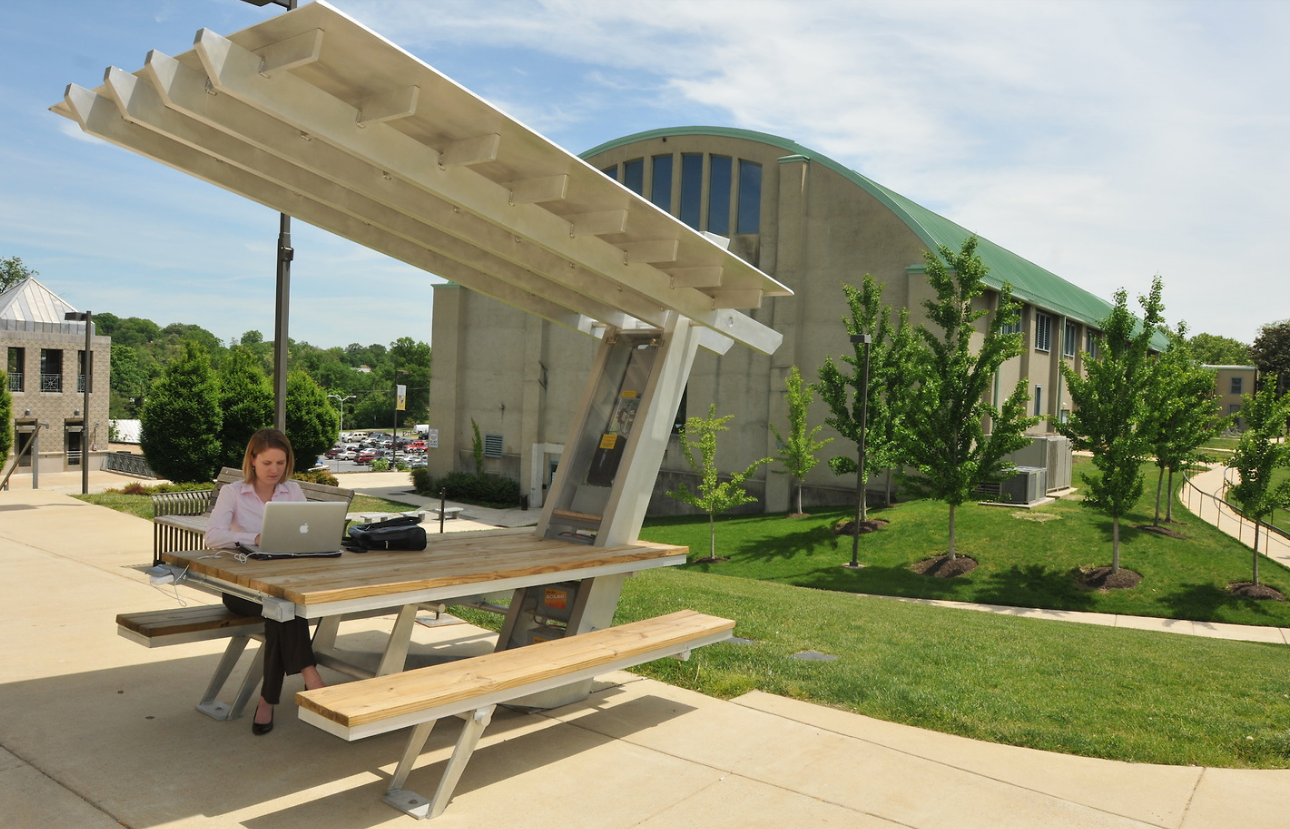 Students at the Catholic University of America designed a solar-powered picnic table with outlets.

The facility will create enough electricity each year to power about 5,000 New England homes.“Students experience a cognitive dissonance,” Dano Weisbord, Smith’s director of sustainability and planning, told UB. “They learn in class that climate change is bad yet they see that we use a lot of fossil fuel to run a campus.”

Some meatless meats cost more than their conventional counterparts. Rather than increasing meal plan fees to cover the higher prices, Adam Millman, senior director of dining at Yale, focuses on balancing the cost of the overall menu.

“The Beyond Meat burger is not a product we’re selling hundreds of every day,” Millman told UB. “On the days we do offer it, we look at the overall menu and offset [its higher cost] with things that have a little bit of a lower cost.”

Keeping instructors engaged requires a proactive approach that includes giving faculty a meaningful role in decision-making as well as building pride in academic departments and institutions.

Is the latest threat to higher ed a set of Greek letters?

New variants may make mandates the only option.

A 12-year-old lawsuit that advocates have called the most important higher education desegregation case in decades “can and should be settled,” according to a panel of judges on the 4th […]