How AI in libraries provides answers on campus 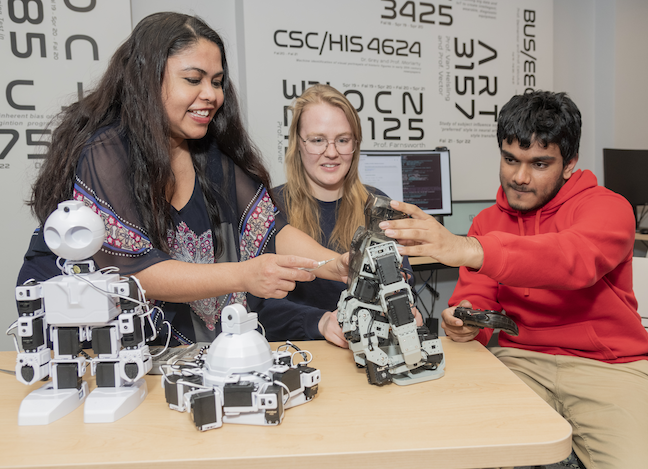 To help students and other users understand artificial intelligence in libraries, the University of Rhode Island opened the first AI lab in any campus library. The lab has an AI supercomputer, several powerful laptops, virtual reality equipment and other devices.

Student relaxation is not the main function of the University of California, Irvine’s groundbreaking library chatbot.

But the managers of ANTswers—the artificial intelligence in the libraries that’s named after the school’s Peter the Anteater mascot—don’t mind that students sometimes ask “him” silly questions, says Danielle Kane, a research librarian who created the tool.

“People are having fun connecting with the anteater,” says Kane, who oversees emerging technologies and service innovation. “I like the fact that during finals, people use him as stress relief.”

ANTswers, which lives at the bottom of the UCI Libraries homepage, runs 24/7 to augment, rather than replace, the university’s reference librarians.

ANTswers launched six years ago as one of the first higher ed library chatbots, and is just one way artificial intelligence in the libraries in enhancing service in higher ed.

AI in libraries has personality

Of the 12,000 questions that have been asked of the ANTswers library chatbot to date, 63% have been library related.

ANTswers has reached an 80% correct rate for library-related queries, though Kane is constantly reviewing her library chabot’s transcripts to improve accuracy. University of California, The Irvine’s “ANTswers” library chatbot has a little personality. “His” favorite colors are the UCI colors, and when people ask if he’s single, he says he’s in a relationship with the university’s online public access catalog.

“What he excels at is directing people around the website, linking to external sites, library searches and walking people through basic tasks,” Kane says. “He has trouble parsing a paragraph of text or something that needs more context.”

Getting technical, she says she created ANTswers in AIML with Program-O open source software to match the patterns in the questions posed. But this library chatbot also has a little personality built in.

“If you ask him personality questions, his favorite colors are the UCI colors,” she says. “His favorite foods are things like ants with a white wine redux. When people ask if he’s single, he says he’s in a relationship with our online public access catalog.”

If a University of Oklahoma student has a question at 3 in the morning, not to worry, the school’s new library chatbot stays up all night.

The library chatbot, which went live earlier this year at the bottom right corner of the university libraries’ home page, answers about 700 simple questions a month, from 7 p.m. to 7 a.m. each day, when the library’s learning lab is closed.

Because AI in libraries must learn from its data, Oklahoma’s library chatbot only answers low-level questions, such as those about library policy or how to find a book.

More complicated queries are still referred to a human due to problems of “algorithmic bias” that can hinder all forms of internet search technology, says Carl Grant, dean of libraries.

“If you do a Google search for CEOs, most of the CEOs you’re going to get back are white men,” Grant says. “While that might reflect reality, we, as librarians, are trying to give people a 180-degree view of matters.”

University of Oklahoma libraries has also created a registry of higher ed artificial intelligence projects, with nearly 20 universities now participating and projects related to any area of campus operations and management.

Researchers and others can use the registry to find grant opportunities and others working on similar projects.

“We believe strongly that no one institution can deal with AI on their own. There needs to be a collaborative approach,” Grant says.

Primavera De Filippi—a permanent researcher at the National Center of Scientific Research—will deliver the opening keynote address at UB Tech® 2020, speaking on the topic of “The Promise of Blockchain, and Its Impact on Higher Education.”

De Filippi is also a faculty associate at the Berkman Klein Center for Internet & Society at Harvard University, and a visiting fellow at the Robert Schuman Centre for Advanced Studies at the European University Institute.

In 2018, the University of Rhode Island opened the first AI lab in any university library so all students and faculty could begin to understand the basics of machine learning, coding and how computers process spoken language.

The lab has an AI supercomputer, several powerful laptops, virtual reality equipment and other devices, but the focus isn’t just on cutting-edge technology, says Karim Boughida, dean of libraries.

More from UB: How chatbots enhance the student experience and improve operations

Discussions in the lab have covered topics such as what it means to be human and how the U.S. will regulate artificial intelligence as technology advances.

Student groups have also considered why some cultures, particularly Japan and Korea, are more accepting than Americans are of robots performing everyday functions, such as helping care for the elderly, Boughida says.

“A tsunami is coming and we’re kind of ignoring it,” says Boughida, referring to the spread of artificial intelligence into more aspects of American life. “We’re not having a national conversation about AI.”

Who is making the strongest case for in-person learning?

Our tech-addicted students, says Hope College President and UB guest columnist Matthew Scogin. They understand the promise that technology holds, but they also understand that authentic human connection makes that promise worth pursuing.

The skill set required for today’s top jobs in higher education has never been more extensive or demanding. Boards of Trustees are looking for leadership in several areas: academic authority, […]

Payment Plans—A Powerful Weapon in the Fight Against Student Debt

While a college degree has never been more important, it has also never been more expensive. How can institutions reduce student debt loads while streamlining processes for the business office? […]